📲
Makaan.com: It is better to buy vs. renting property in Bangalore

Makaan.com: It is better to buy vs. renting property in Bangalore

A property seeker in Bangalore is confused between opting for a rented accommodation or giving that rental amount as EMI for buying a house. In the absence of a robust and reliable tool, these decisions were traditionally taken with gut feel or with the guidance of a close relative / friend, leaving scope for error. The latest report from Makaan.com recommends Bangalorean’s to buy a property rather than staying on rent. The Makaan.com Buy Vs Rent index (MBRI) for the period January to March 2011 has been released with some interesting findings. MBRI is a tool that aims to help property seekers make an informed choice between buying and renting of property in top Indian cities/ sub cities.

When it comes to Bangalore, the city is divided into 5 sub-cities and MBRI is calculated for each sub-city to enable seekers make informed choice in their respective areas of interest. Let’s look at some recommendations for buying Vs. renting property in Bangalore.

Sub-cities of Bangalore East, Bangalore North, Bangalore South and Bangalore West are recommended for buying Vs. renting. Typically if the MBRI for a sub-city is between 1-20 it denotes that it is much less expensive to buy a home than to stay on rental in these sub-cities. Property seekers looking at investing are advised to buy a property than staying on rentals.

Typically if the sub-cities have an MBRI of 21-25 they will fall under the neutral range. This denotes that it is relatively more expensive to buy a home than to stay on rental. The current MBRI release does not identify any sub-city in Bangalore where the MBRI is in this range.

According to the report, Bangalore Central is recommended for renting Vs. buying. This sub-city has an MBRI value of 25+ indicating that it is much more expensive to buy a home than to stay on rental. Property seekers investing here are advised to stay on rental rather than buying the property.

Shift in Bangalore trends over past quarter

If one compares the current report with the previous report (released for the period October – December 2010), the MBRI for sub-cities of Bangalore East, Bangalore North and Bangalore South has dropped by 3 MBRI points, each. This indicates that rentals in these sub-cities have risen more than the capital values, making these sub-cities relatively less attractive for rentals. 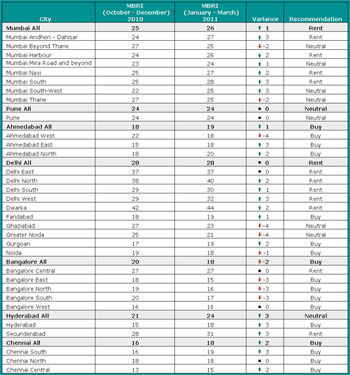 Makaan Buy vs. Rent index is a quarterly initiative and will be updated every 3 months. The detailed findings can also be accessed at http://www.Makaan.com/MBRI