📲
Has your sub-city moved from buying to renting zone within 3 years? Check the latest Makaan.com Buy vs. Rent Index (MBRI)

Has your sub-city moved from buying to renting zone within 3 years? Check the latest Makaan.com Buy vs. Rent Index (MBRI)

“What has been the change in the property market within the last 2-3 years?” asks Raghu Yadav. He continues, “I keep following the appreciation/ depreciation/stabilization in the property prices on a quarterly basis, but what impact does it have on me? Do these minor fluctuations bring about any change? I feel that the property prices have remained almost the same for the past 2-3 years.” Do you also feel the same? Let us see what have been the changes in the past 3 years and how have these changes impacted your city area or locality.

Everyone has an opinion on whether it is better to rent or buy a home in the prevailing market conditions. Often these opinions are based on personal circumstances and often what is better for one person may not be the best solution for someone else. As the property market does not see changes at a rapid pace, the latest Makaan.com Buy vs. Rent Index (MBRI) works out a comparison between the changes that happened from OND 2011 to OND 2013. What comes out clearly according to the report is that the key Indian cities, including Mumbai, Delhi, Bangalore, Ahmedabad, Pune and Chennai have seen a significant shift in sentiment towards renting in the past three years; another fact highlighted is that although the rental property prices in these cities seem attractive and affordable at present, it is not that purchasing a property has always remained outside the reach of the common man. Let’s retrace the index from 2011 onwards:


The national MBRI data for OND 2013 reflects that renting is preferred over buying and speculating. Overall a lower MBRI (under or equal to 20) indicates a preference for Buying vs. Renting and a higher MBRI (over 25) indicates a preference for Renting over Buying. MBRI of 21 to 25 is a Neutral zone where the person can take a decision based on his liquidity position. On analyzing the MBRI for OND 2013 for 31 sub-cities in India (see table), it can be observed that cities like Mumbai, Pune, Delhi, Chennai and Ahmedabad are preferred for Renting whereas Bangalore and Hyderabad are in the Neutral zone. In fact there is no city in India where buying a property is advisable over renting. However, we must clarify that there would be pockets within these cities where Buying would make more sense due to local dynamics. It is interesting to compare the 2013 data with the index for 2011 and 2012. In 2011, out of the 31 sub-cities, 14 were either in buying or neutral category, which lowered to 11 in 2012 and further dropped to only 6 in 2013. Read further to know more regarding MBRI changes on a city basis

Mumbai – MBRI for the commercial and financial capital of the country, Mumbai has surprisingly remained on the rental side for over three years now. The index has only moved further on the rental side going from 30 (2011) to 34 (2013) indicating that the property prices have increased at a rate that was higher than the rate of growth for rentals. Furthermore, all the sub-cities of Mumbai have also been in the rental zone for OND 2011 to OND 2013. The maximum variation in points can be seen in Mumbai Beyond Thane going up by 8 points (OND 2011 and 2012). 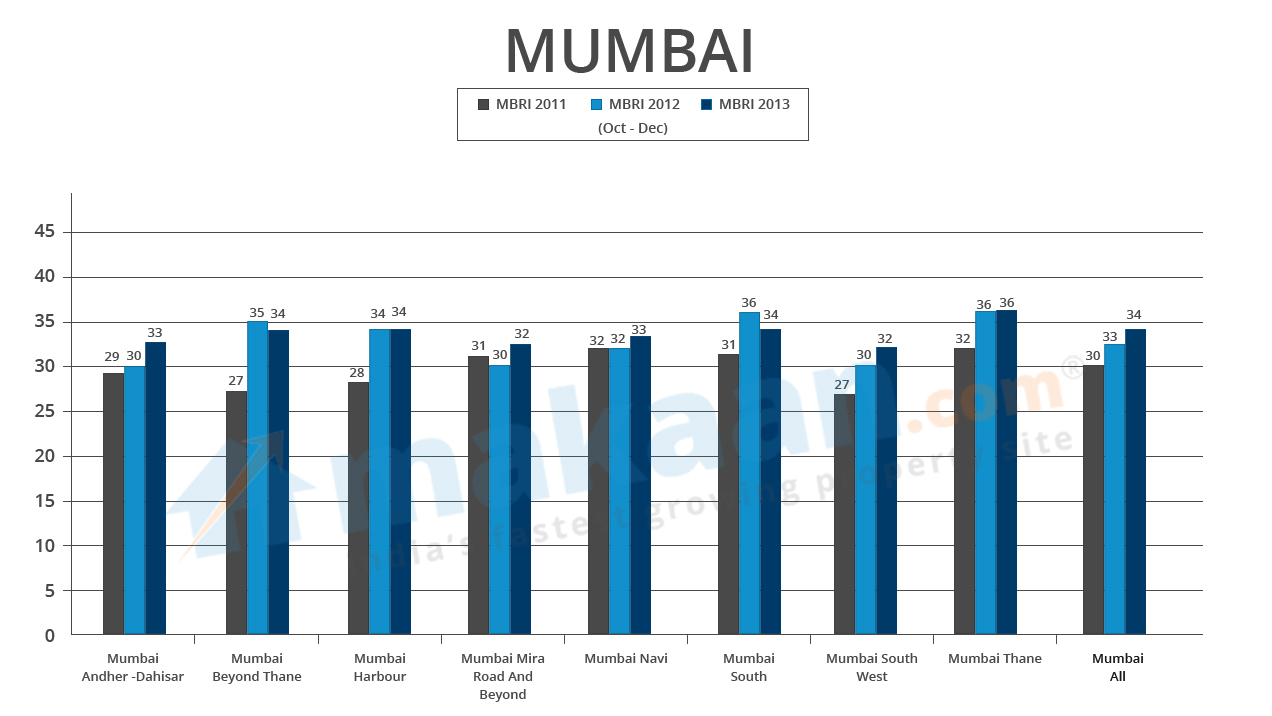 Ahmedabad – MBRI data has placed the city of Ahmedabad on the rental side for over three years. Within Ahmedabad city, the MBRI for Ahmedabad North has experienced the maximum changes; it has jumped 9 points from 2011 to 2012 and another 3 points from 2012 to 2013. The Oct-Dec. MBRI for Ahmedabad West shows a positive trend for the homebuyers as over the three years it has been moving lower on the rental scale, coming down from 31 to 29 to 28. This means that in the coming months the locality might move to the neutral zone. 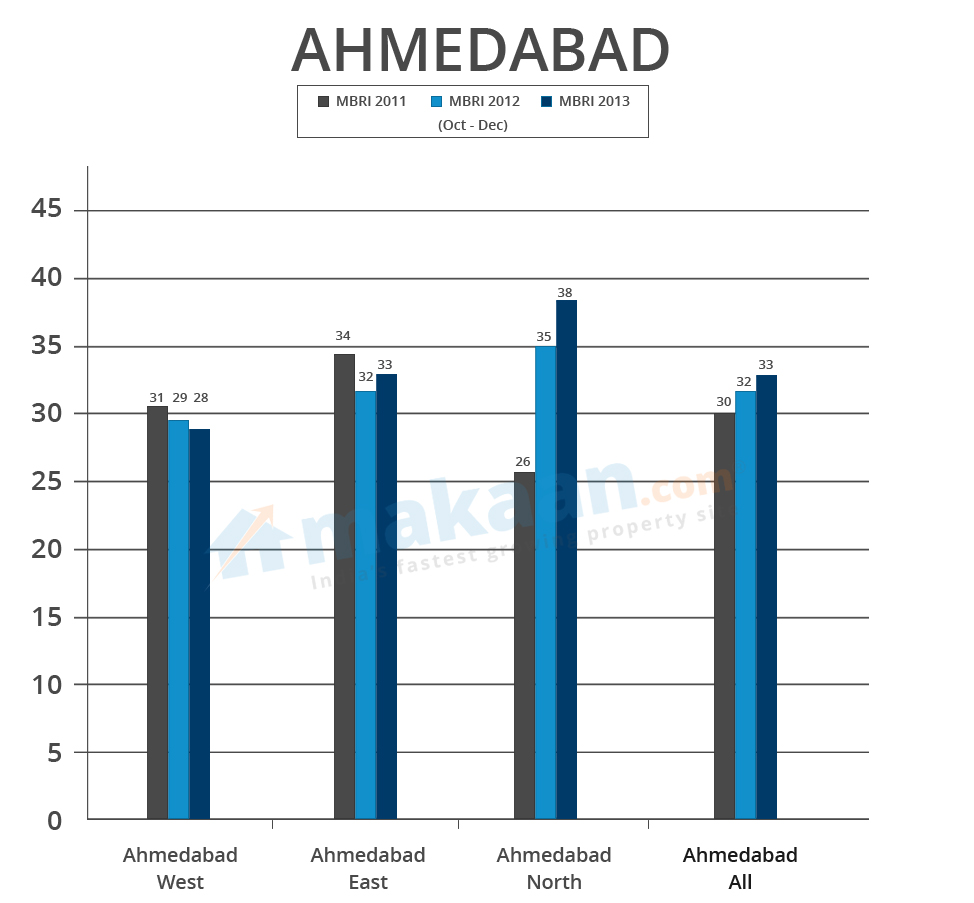 Delhi NCR – The index for the city of Delhi NCR has also remained in the rental zone for the three years; however, there are localities within the city that have shifted zones. The overall city has retained its preference for rental and the argument in favor of rental has got strengthened over the last 3 years. The NCR regions like Faridabad, Noida, Gurgoan and Ghaziabad have shifted zones. Faridabad has seen the maximum shift from Neutral (OND 11) to Buy (OND 12) to now Rent (OND 13). The locality has seen the maximum shift of 13 points within one year.

However, as compared to the main city of Delhi, the NCR still remains affordable. Home buyers are advised to purchase property in Noida depending upon their financial condition as MBRI for this sub-cities lies between 21 and 25. Among areas that should be preferred for renting, Dwarka takes the lead not only in Delhi NCR both at the National level as well. In Dwarka, the MBRI has jumped the highest in three years, 19 points, and here rentals are far cheaper compared with the prevailing property prices. 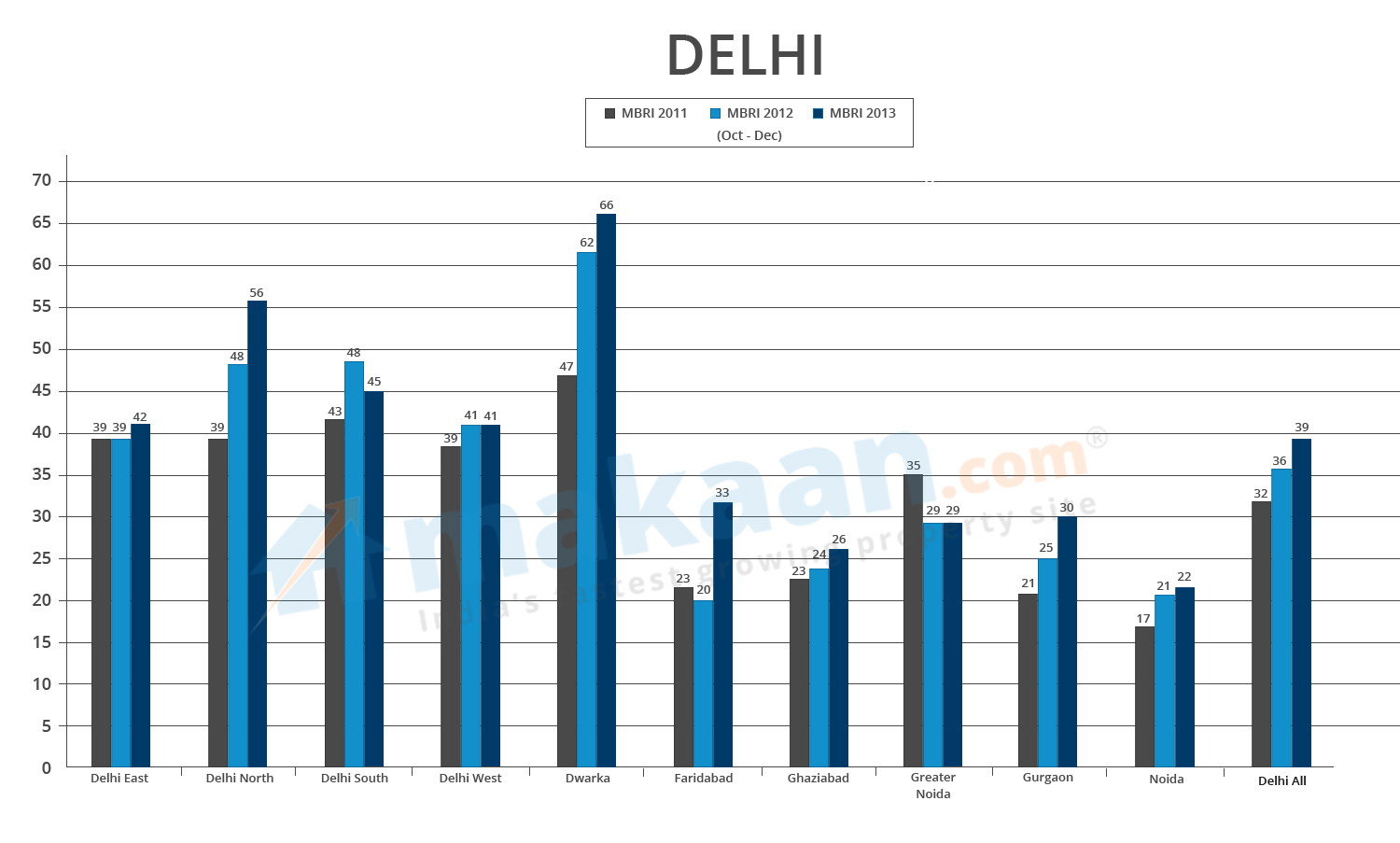 Bangalore – Bangalore has witnessed the highest IT boom in the country and the same is reflected in the property prices. The index for Bangalore has moved to Neutral zone from Buying zone. The MBRI figure has moved from 19 to 24 over three years. The city that was preferred for buying in 2011, moved to Neutral zone in 2012 and moved further in the Neutral category in 2013; it is now suitable for making a conscious investment. 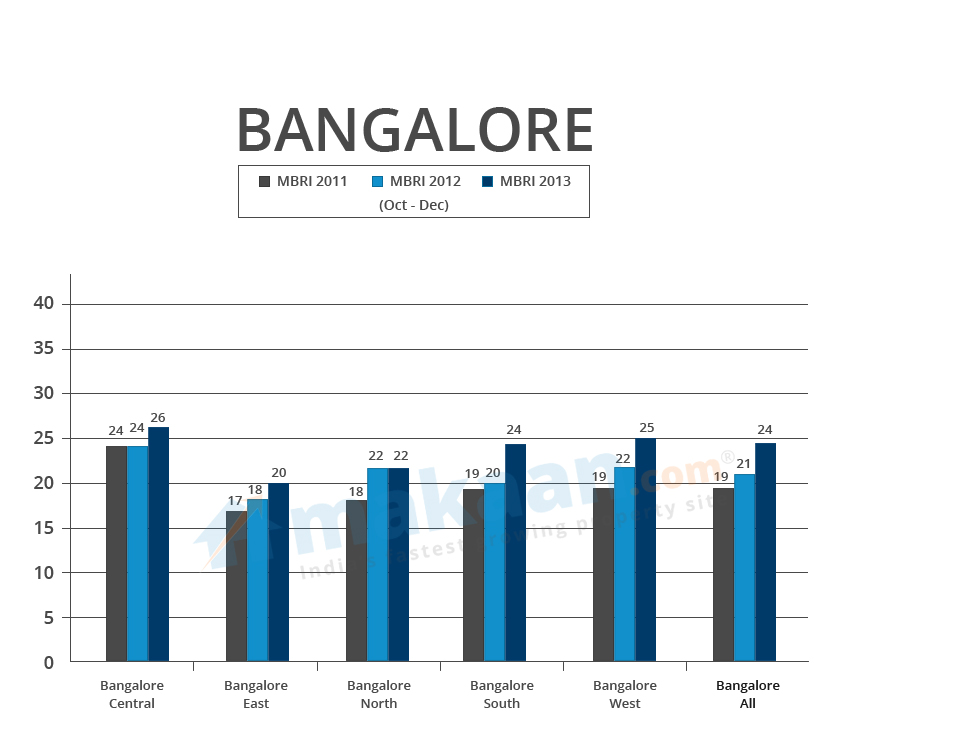 Hyderabad –The index for Hyderabad has moved from 20 in OND 2011 to 24 in OND 2012 to 25 In OND 2013. Overall, the shift has been from Buying to the Neutral zone; however, it can be seen that the major changes happened between 2011 and 2012. It shows that the year 2013 on the whole saw stabilized trends in the property market of Hyderabad. The current MBRI figure shows the city is suitable for making a conscious investment.

Chennai – The index for Chennai has increased from 7 points from OND 2011 to OND 2013 period. The overall city has drastically moved from Neutral to Rental range and property seekers in Chennai are advised to rent a property rather than buying. Both the sub-cities of Chennai that were in Buying and Neutral zone till OND 2011 have now undisputedly stayed in Rental zone over 2012 and 2013.

Pune – The index for the city of Pune has moved 3 points from OND 2011 to OND 2013 and has moved to the rental scale after remaining in the neutral zone in 2011. This figure provides a slight indication that the property prices have gone up or there is softening of rentals in the city. Property seekers in Pune have to be a little cautious while making the property purchase as the prices have started increasing.

With such a comparison among the MBRIs for OND 2011, 2012 and 2013 shows how much each sub-city has experienced changes or remained consistent. For now, we see that most of them have moved further on the rental scale; the major shift happened between 2011 and 2012 whereas the index more or less remained stable between 2012 and 2013. therefore, after a stabilized year, the property buyers and sellers alike hope for reduction in property prices, higher transactions and more transparency in the system. For now, MBRI suggests that the home seekers should prefer staying on rent.