📲
These Are Prominent Green Buildings In India

These Are Prominent Green Buildings In India

Green buildings are the need of the hour. The deteriorating environment has triggered many developers across the city, in the commercial as well as residential sector, to adopt green practices.

Nevertheless, there are some developers that have already adopted the green building model to bring down the total carbon footprint generated. "The Real estate industry and the government have recognised the potential national savings of having efficient and environment-friendly architecture and together developed and adopted regulations such as the Energy Conservation Building Code, the National Building Code, and certifications such as LEED and GRIHA. These codes have brought about a revolutionary change in defining the fact that buildings are no longer tall, lifeless edifices but living, breathing communities having a well-defined purpose," says Shantanu Chakraborty, VP, Brookfield Properties.

According to Chakraborty, following factors are being considered by building designers and owners:

*How far is the office space located and whether there is access to public transport such as Metro and is the campus friendly for non-motorized transportation like bicycles?

*What facilities are present for detoxing such as open gyms, gardens with seasonal flowering and jogging tracks and so on?

*Does the campus use local materials and is the onsite plantation covering a certain percentage of the total campus area?

*Is my energy cost low so that having long term leases with low operating costs can be sustained?

MakaanIQ, on the occasion of the World Environment Day, lists six such prominent green buildings that are based on the above metrics and consideration-

Registered under the Green Rating for Integrated Habitat Assesment (Griha), this hotel has been listed as the best performer under the Passive Architecture Design category. The building is sustainable and contemporary as the orientation of the structure is designed keeping in mind the wind directions, the path of the sun throughout the many seasons. Inspired by its name, the building has diamond cuts, tapered edges, straight lines that ensure ventilation and natural lighting in the indoors. 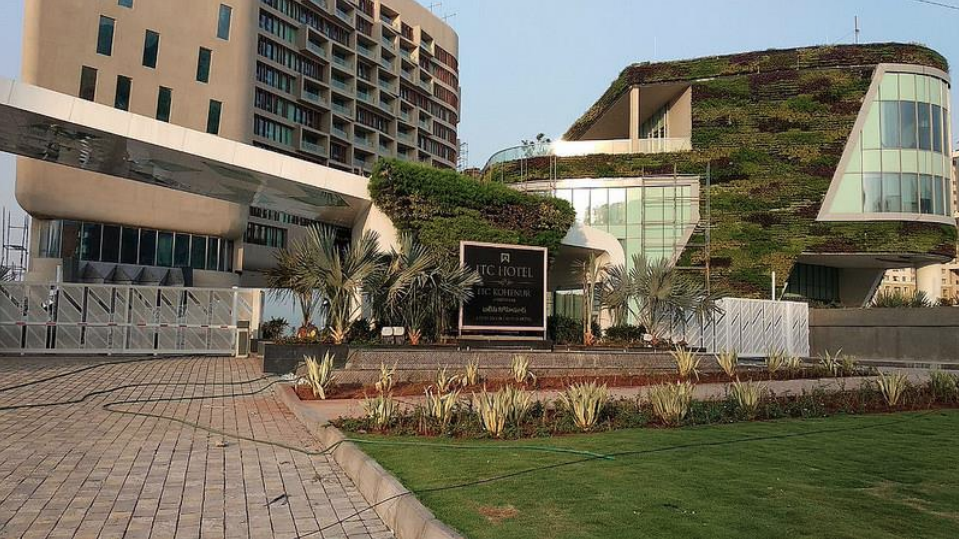 Not many educational institutes in India have a green structure. The Indian Institute of Management in Raipur is an exception. The campus of this government-run management college has been constructed in the newly-built Naya Raipur. The building has been listed as the best performer under the Energy Management category by Griha. Around 27 per cent of the land inside the campus, which is spread in an area of 200 acre, is reserved for greenery and afforestation. Spread over an area of 80,000 sq ft, Mahinda Splendour is a platinum project certified by the Indian Green Building Council. The housing project located in Mumbai has green features, including rainwater harvesting system and ample greenery across the campus. Among the popular green projects in India, the developer of the project has also associated with The Energy and Resource Institute (TERI) to set up a research facility for creating innovative solutions and energy efficient technologies that can be adapted to Indian climatic conditions. Mantri DSK Pinnacle is a gold-standard, 502-feet green residential skyscraper, certified by the LEED (Leadership in Energy and Environmental Design). This project offers centrally air-conditioned flats with personal controls. The apartments here are fully-automated and are called as Smart Digital Homes that save electricity by up to 40 per cent. The project has 80 per cent open space and is a combination of uber-luxury with sustainability. A luxury housing project in Pune’s Koregaon Park, Vascon Windmere is spread in an area of over five acre with more than 80 per cent open space and pre-certified platinum rating by the LEED. The project has its own sewage and water treatment plant, solar PV cells for lighting building lobbies and staircase, motion sensor lighting and garbage chute with a treatment plant. It is Cognizant’s first facility to harness renewable energy for part of its power requirements. Around 10 per cent of the electricity requirement is met through solar energy while 17 per cent is being fulfilled by wind energy. The Coimbatore facility which is spread over an area of seven lakh square foot also has Gold certification from the LEED. Cognizant has two other green campuses in Chennai and Kolkata which have a Gold and a Silver certification, respectively. These Are The Top Green Buildings In India

How An Equilibrium Between Smart Cities And Environment Can Be Maintained

Buying A Newly Constructed Property? Get Ready To Feel The Heat

Looking For Property In Hyderabad? Here’s A List Of Top Projects

Looking For An Apartment At An Affordable Rent In Hyderabad? Consider These Localities