📲
Indian Hotels That Offer A Slice Of Royal Living

Indian Hotels That Offer A Slice Of Royal Living

These citadels have been turned into luxury hotels that give their guests a feel of the grandiose that was the way of life for these royal families. Photos: Wikimedia

The royals are the symbols of prosperity, grandeur and the seat of power. The kingdoms and the princely have long been merged with the centre post-Independence.  The palaces of the kings and their queens are the living examples of architectural and engineering workmanship. Even though the palaces are no more the seats of power, many of these erstwhile palaces have been transformed into new-age luxury hotels. These citadels have been turned into luxury hotels that give their guests a feel of the grandiose that was the way of life for these royal families.

Here we bring you a list of grand palaces that have been turned into equally grand hotels. 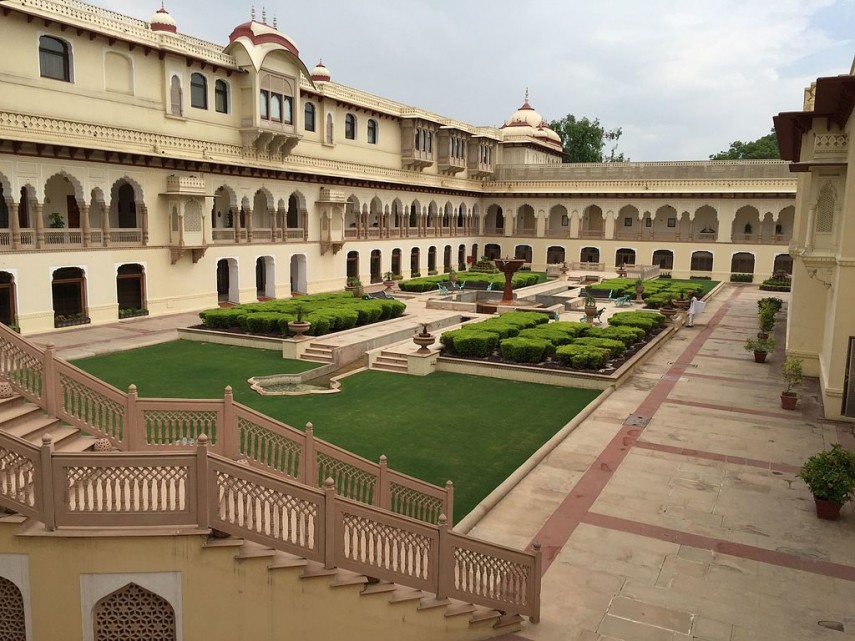 Situated in Rajasthan's capital Jaipur, Rambagh Palace was the former residence of the Maharaja of Jaipur. Located eight kilometres away from the old city, it is known as the Jewel of Jaipur. Built in 1935, it was renamed by the reigning king Maharaja Sawai Ram Singh II. The royal family lived in the palace till 1957, after which it was converted into an upscale hotel managed by them and from 1972 by The Taj Group of Hotels, Resorts and Palaces.

Built in the 1930's, Umaid Bhawan Palace is located in Jodhpur, Rajasthan. With 347 rooms as Art Deco suites, the Maharaja of Jodhpur still occupies a part of the palace. Topped by a 100-ft dome, it has become the face of modern Jodhpur. Today, half of the palace has been turned into a hotel. It consists of a library, billiards room along with subterranean spa. The Sunset Pavilion and the Pillars restaurants give gorgeous a view of the Blue City. The hotel has 70 guest rooms, including the lavish 'Regal and Vice-Regal Suites' and magnificent 'Maharaja' and 'Maharani Suites'.

Built on the shore of Lake Pichola, the crescent-shaped Shiv Niwas Palace was the former residence of Maharana Fateh Sing of Udaipur. The palace was converted into a commercial luxury hotel in 1982 and is managed by the HRH Group of Hotels.

Falaknuma “Mirror of Sky” in Urdu was the residence of the uber-rich of Hyderabad. The Falaknuma Palace was simply closed up after Independence. A decade later, Esra Jah, the former wife of the eighth Nizam of Hyderabad, began sensitive restoration of the palace with the help of the Taj Group. The 60-bedroom hotel houses a restaurant --- Ada, which specialises in Hyderabadi slow-cooking cuisines. The dining room of the Falaknuma has the world's longest dining table, with the seating capacity of 100 guests. The library is also a noteworthy room in the palace as it is built in the replica of the Windsor castle.

It is a world's best heritage palace and has been awarded the National Incredible India award by the Department Of Tourism, Government of India. Thakur Mohan Singh Ji, ruler of Chaumoo, built the first palace of Jaipur in 1727 which is today known as “The Raj Palace”. As many boasts 50,000 sq ft of hand paintings and 8,000 sq ft of gold foiling. It opened as a grand heritage hotel in 1997 after renovation. 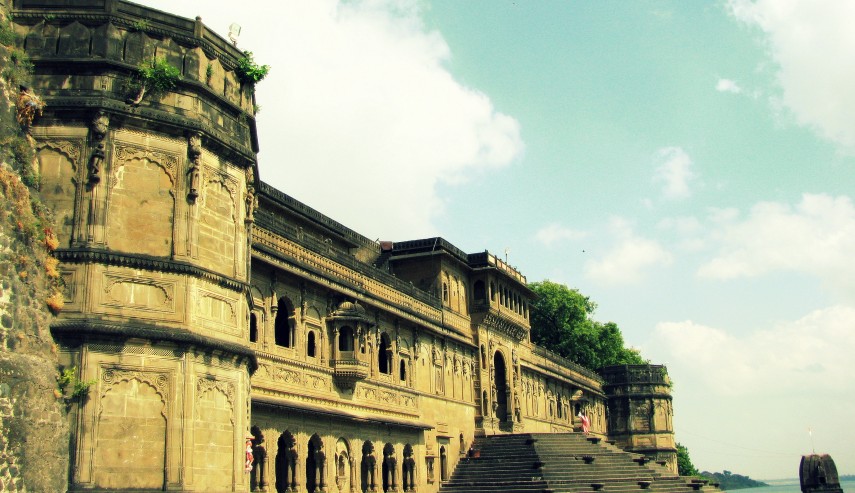 The 18th century fort palace was built by the warrior queen Ahilya Bai Holkar. Located in Maheshwar on the hilltop, Ahilya Fort offers a mesmerising view. One can watch the life on the banks of the Narmada from the ramparts of the palace or take a boat ride after the sunset.

The 18th-century palace is situated near the bank of a lake in Dungarpur. The Maharaja of Dungarpur had renovated the palace with a great flair after preserving the original Art Deco furnishings of 20 guest rooms, including the 'English' bathrooms. 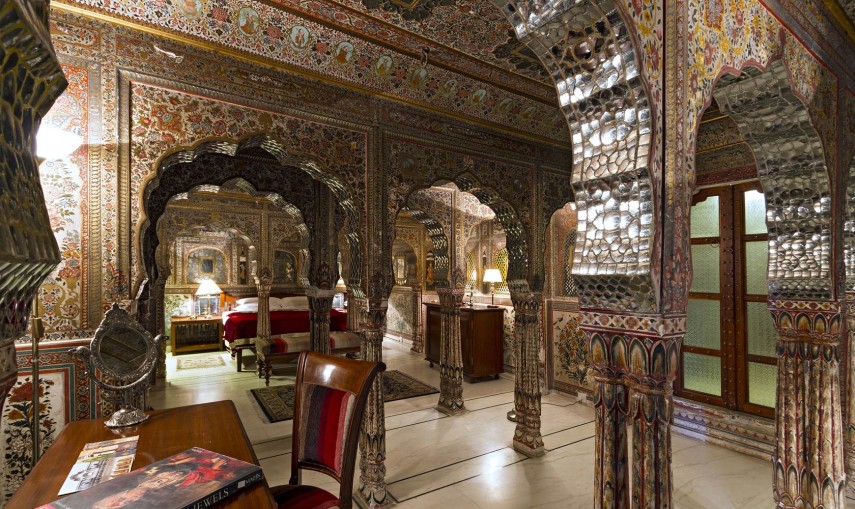 The Samode Palace was built by the noble feudatory with the hereditary title of 'Maha Rawal' or 'Maha Saheb' of the Amber and Jaipur principality in Rajasthan. It is located 40 km north of Jaipur, the palace interiors are made in the ancient architecture of Rajasthan. The rooms consist of marble floors, intricately ornamented pillars, mosaic walls, with luxurious carpets, and decorated with old wall paintings. 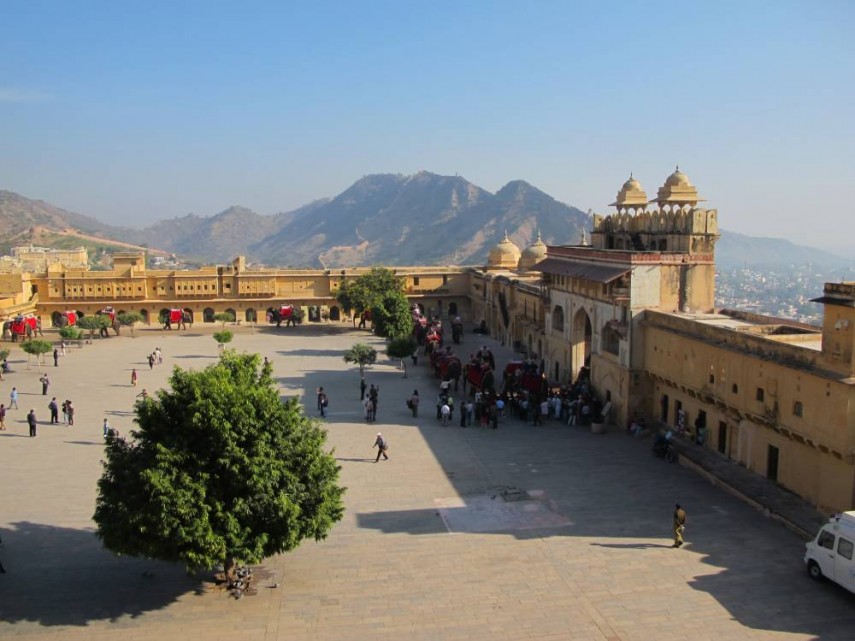 Fort palace Ramathra Fort is built on a hilltop in the wilderness, which gives it a special appeal. The palace is owned by Thakur Brijendra Raj Pal and his royal descendants Ravi and Gitanjali Rajpal. Dotted with sun-loungers with a view of splendid lakes and forests full of flora and fauna, the hotel's walled vegetable garden and a whirlpool tub in a turret are the attractions. 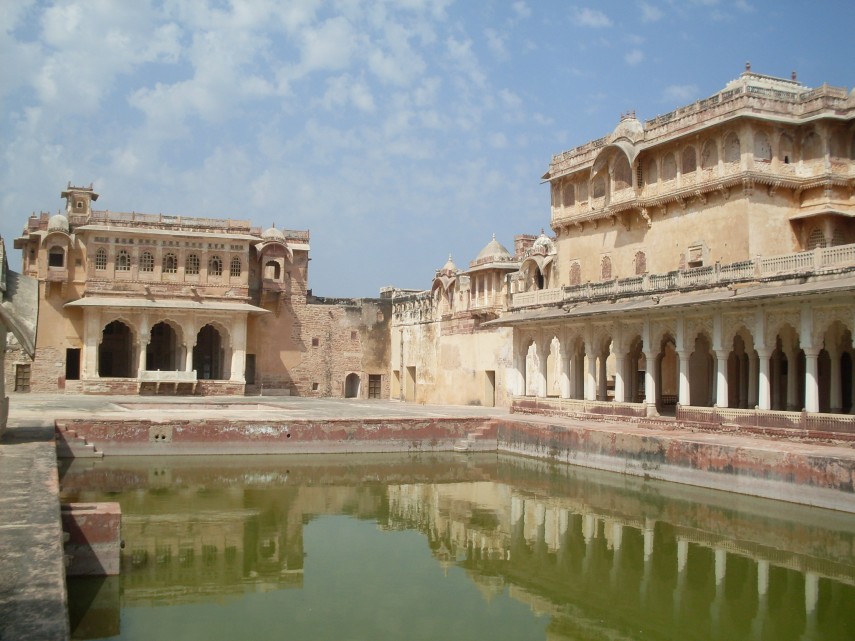 Set on the edge of the Thar, the stay in the palace hotel is worth it. The Ranvas Palace is constructed inside Nagaur's 500-year-old Ahhichatragarh Fort which has been painstakingly restored over the years by Maharaja of Jodhpur. The palace gives access to the public beyond the public-viewing hours and the freedom to stroll through the exquisite painted pavilions is worth experiencing.