📲
10 Most Inspiring Glass Buildings Around The World

10 Most Inspiring Glass Buildings Around The World

(Dreamstime)
The world of transparent structures is a fascinating one -- for architects as well as those who experience it. Glass has been one the most innovatively used building materials, as it gels into any kind of environment, purely reflecting the nature and blurring the lines between the outdoors and indoors. Though every building made using glass poses a unique challenge, the outcome of these buildings has always been awe-inspiring.
MakaanIQ lists 10 unique glass structures around the world that inspired the world of architecture and design.
30 St Mary Axe (the Gherkin), London, England 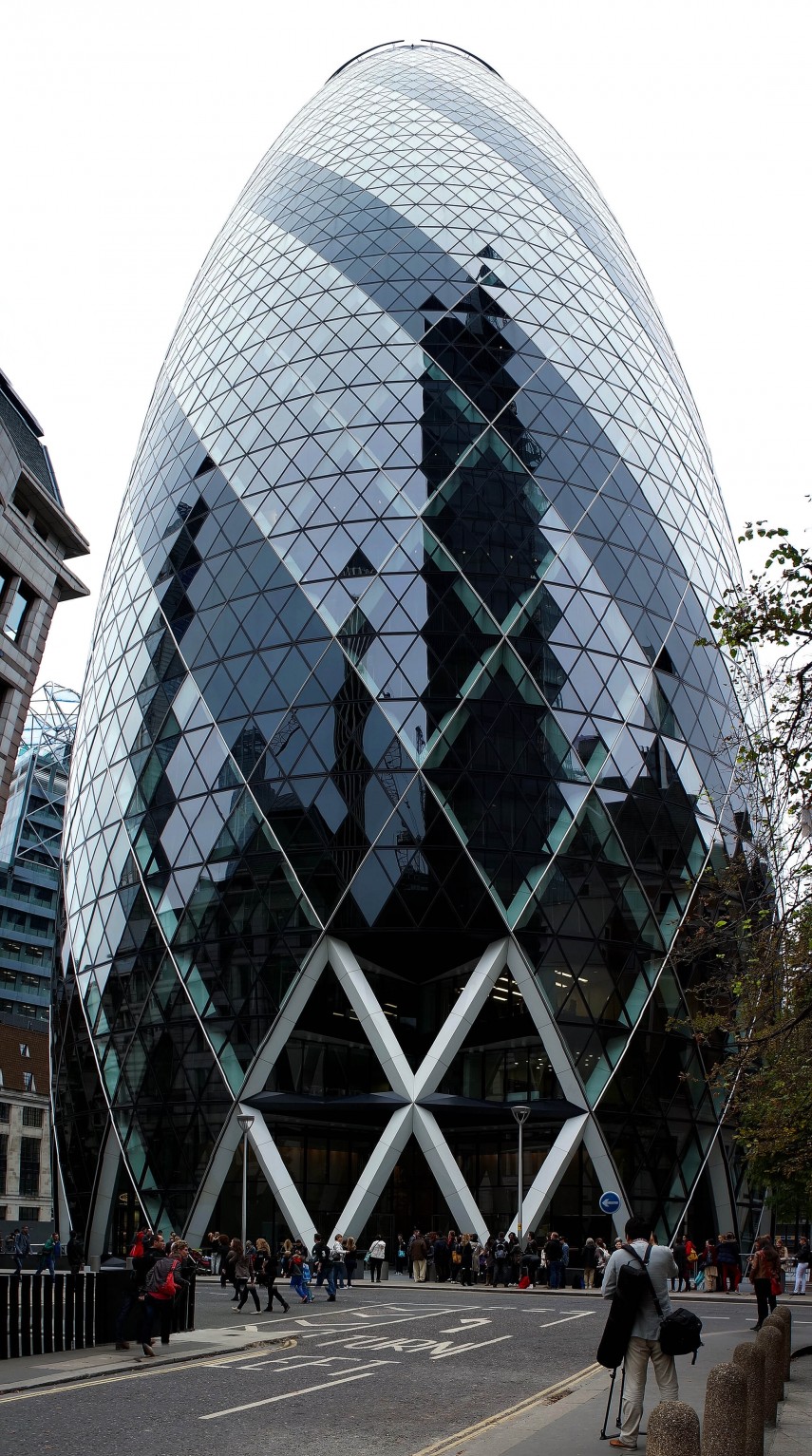 (Wikipedia)
An iconic structure located in the financial district of London, The Gherkin, was designed aerodynamically, keeping in mind the weather conditions of the city. The structure, which allows smooth flow of the wind, was designed by Norman Foster and Arup Group and completed in 2003. The façade design is equipped with advance glazing technologies, ventilated cavities and blinds, which provide up to 85 per cent solar protection. These reduce heat gain and allow daylight to come in. It also uses smart building control systems.
Aldar Headquarters, Abu Dhabi, UAE 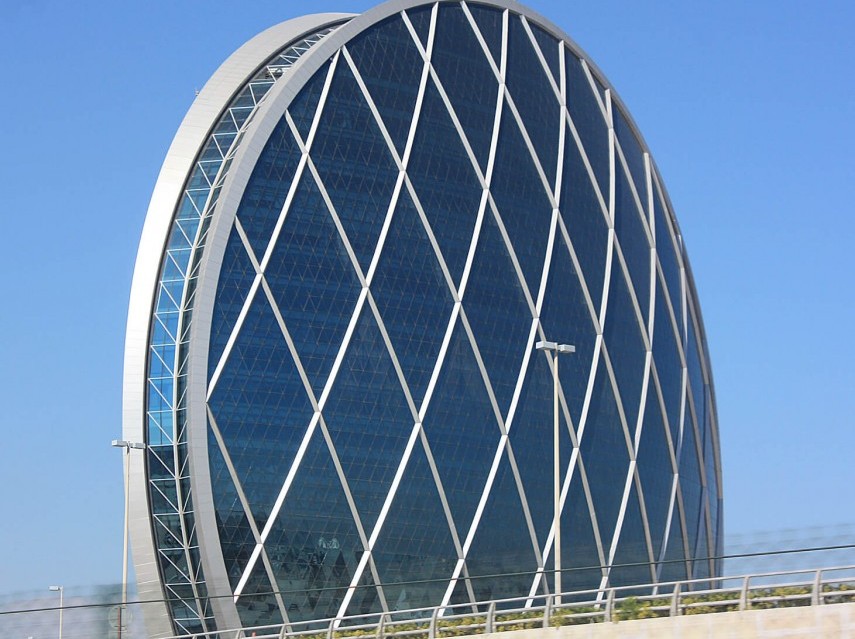 (Wikipedia)
This commercial architecture is the first circular building in West Asia, boasting a distinctive design of a semi-spherical building with two convex-shaped façades linked by glazing. It was designed on the concept of Global Ratio, a mathematical equation that appears in the works of nature; in this, a>b>0. This has also been described in a drawing of a man over a pentagram inside a circle by the 16th-century philosopher Heinrich Agrippa. Designed by MZ Architects, the building's circular shape symbolises unity, stability, rationality, and infinity. Also, it represents completeness, encompassing both space and time. The challenges in building this structure includes a decision on the point where the building would meet the ground and the roof structure.
The building, made keeping in mind the environmental concerns, received an LEED silver rating award from the US Green Building Council.
Basque Health Department Headquarters, Bilbao, Spain 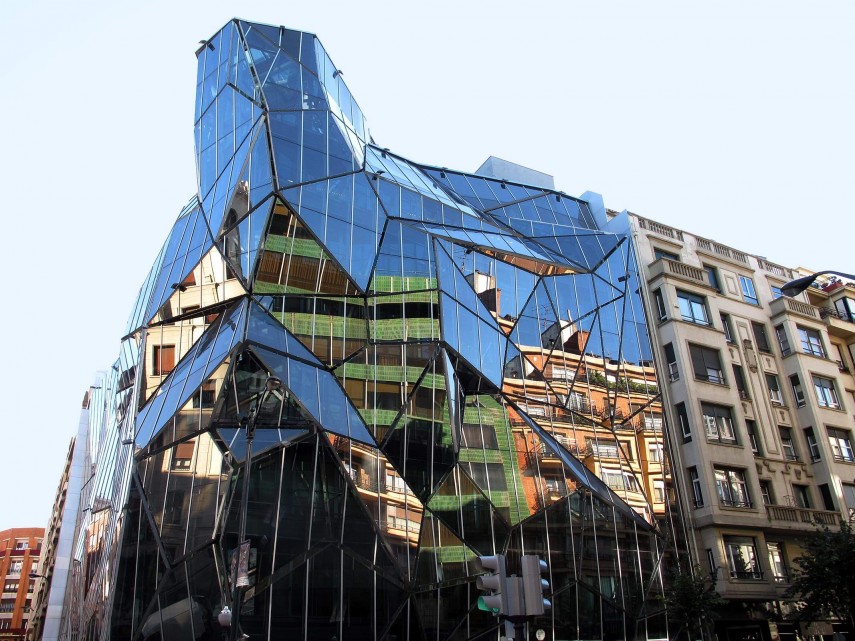 (Wikipedia)
Located on one of the busiest crossroads of Bilbao, this building is known for its cubist structure, which gives a different view of the city at different times of the day. Designed by Coll-Barreu Arquitectos and boasting a double façade, this building is made of glass and steel. The double façade gives the building an energetic look, besides making it fire-resistant and acoustic-insulated. As the name suggests, the building serves as the headquarters of the health department of Basque.
Botanical Garden of Curitiba, Brazil

(Wikipedia)
A major tourist attraction in South Brazil's largest city, Curitiba, Botanical Garden of Curitiba is a mix of a botanical garden and a museum. It is known for its French-style gardens, and a principal greenhouse made of iron and glass gives it the look of a royal transparent palace. The greenhouse, designed by architect Abraão Assad, is said to be inspired by the Crystal Palace that existed in London until 1851.
The principal greenhouse, also the centre of attraction of this garden, has three domes, designed in an art nouveau style, with a modern metallic structure. This structure has been illuminated on different occasions since 2008, including Breast Cancer Awareness Month (pink) in October, and during Christmas. Besides, it was also illuminated to mark a thousand days to the football world cup in Brazil (2014), between 16 and 23 September 2011.
Hotel W, Barcelona, Spain 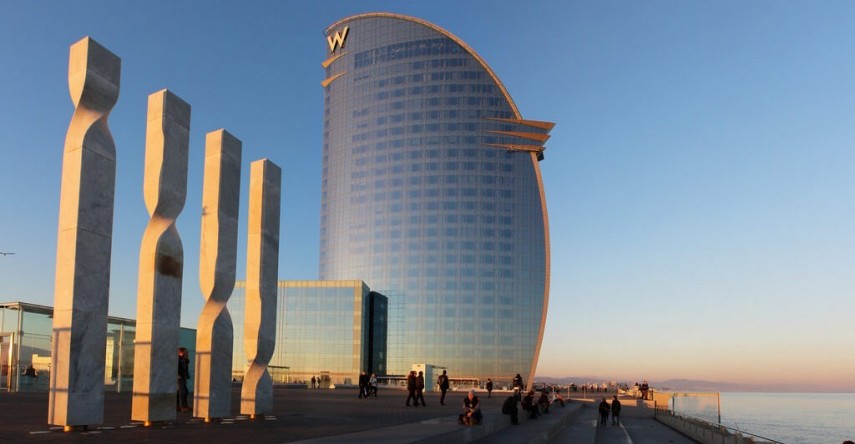 (Flickr/Joan Campderrós-i-Canas)
Designed by architect Ricardo Bofill, the hotel is a welcoming sight at Barcelona Port on the shores of Mediterranean Sea. This hospitality structure is designed in the shape of a sail and placed on a 10-hectare land acquired to build an urban coastline which will include other offices, and retail & entertainment structures. This glass building uses a silver reflective façade that blends with the colours of the water and sky, showcasing different colours of the day.
This five-star hotel comprises 473 rooms, 67 suites, a rooftop bar with panoramic city views, a spa and fitness centre, indoor and outdoor pools, terraces, beaches, restaurants, and high-end retail outlets.
Louvre Pyramid, Paris, France

(Flickr/edwin.11)
Located in the main courtyard of the Louvre Palace, this glass-and-metal pyramid structure was built in 1989 and has been a landmark of Paris since. Designed by Chinese-American architect I M Pei, this pyramid structure serves as the main entrance of the Louvre Museum. It is 21.6 metres high and consists of 603 rhombus-shaped and 70 triangular glass segments.
This entrance was created to accommodate the growing number of visitors to the museum which the original entrance couldn't hold.
The visitors now enter the pyramid, descend to the lobby of the museum and re-ascend to the main buildings.
National Grand Theatre, Beijing, China

(Wikipedia)
Also known as The Giant Egg for its dome-like structure, the National Grand Theatre is situated in the middle of a man-made lake. Designed by French architect Paul Andreu, this structure is made of titanium and glass. It was constructed in five years -- the construction began in 2001, and the theatre was opened to public in 2007-end. The structure, which according to many also looks like a giant water drop, serves as the concert and theatre house in Beijing with three halls -- the Opera Hall, Music Hall and Theatre Hall -- accommodating 5,452 guests in one go. It is spread over an area of 219,400 square metres and is 46 metres high. The main entrance of this building is through a hallway that runs underneath the lake.
Nelson-Atkins Museum of Art, Missouri, The US 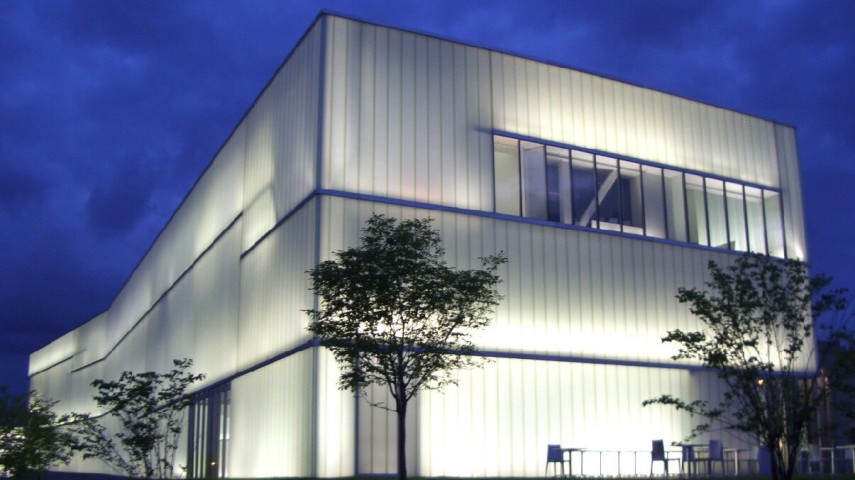 (Wikipedia)
The Bloch Building, which is an addition to this museum, is known for its glass architecture. In 2007, this structure was ranked number one in Time magazine's list 'The 10 Best (New and Upcoming) Architectural Marvels' around the world. The Bloch Building was designed by architect Steven Holl and was opened to public in 2007. According to the architect, the new building "is distinguished by five glass lenses, traversing from the existing building through the Sculpture Park to form new spaces and angles of vision". This structure is a perfect mix of landscape, architecture and art. The visitors here can enjoy the building views from one level to another, and from inside to outside. While natural light fills the building during the day, the light inside glows the structure during the night.
The Bloch Building houses an art library, a bookstore, and a café.
Netherlands Institute for Sound and Vision, Hilversum, The Netherlands 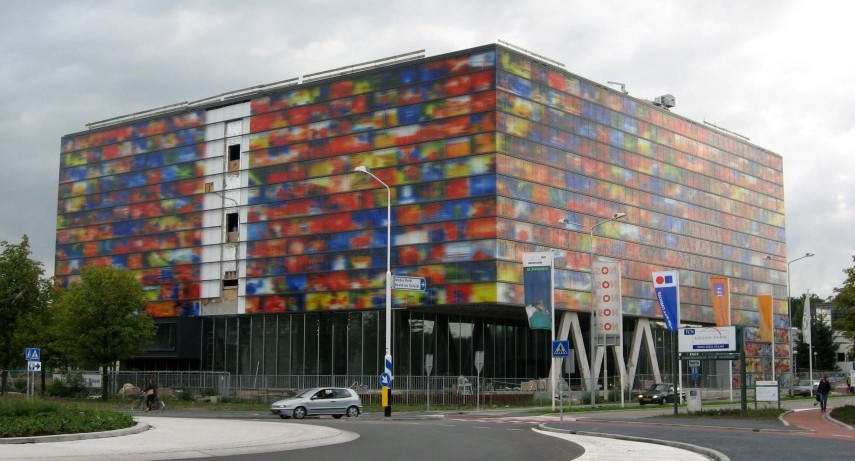 (Wikipedia)
The Netherlands Institute for Sound and Vision, a cultural archive and museum, is known for its glass architecture, along with being the largest audio-visual archive in Europe. The present look of this building was designed by architecture company Neutelings Riedijk Architecten and completed in 2006. The glass used on the façade of the building is based on original television images. These images were taken from the archives here and translated into 2,100 high-relief glass panels of different colours, composed by graphic designer Jaap Drupsteen.
The USP of this structure are the iconic images on the glass that appear and disappear as the daylight moves. The building is divided in three broad areas -- the archives, TV & Radio exhibition centre, and research centre for professionals.
Reichstag Dome, Berlin, Germany 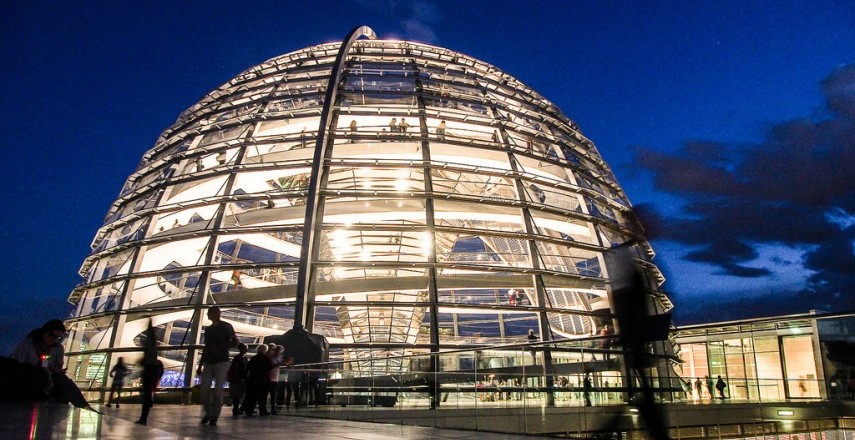 (Flickr/Sharat Ganapati)
Rebuilt on the top of Reichstag building in Berlin, the glass structure Reichstag Dome was designed by architect Norman Foster. It was constructed in 1999 as a mark of reunification of Germany. This transparent 360-degree dome is a prominent landmark in Berlin. While taking a walk here, you can view the whole cityscape. The centre of this dome, a cone-shaped structure, also made of glass, directs sunglight into the building. The structure also has energy-efficient features, especially glass that lets the daylight in.
Architecture an... makaaniq-india National Grand ... Reichstag Dome 30 St Mary Axe