The 11-km stretch between Jubilee Bus Station and Mahatma Gandhi Bus Station of the Hyderabad Metro Rail project is set to be opened soon, with the authorities issuing the safety clearance to the last corridor of Hyderabad Metro rail project under Phase-I. Once the route under the Green Line becomes operational, commuters will be able to cover the entire distance in 16 minutes, a reduction of half hour in travel time. By road, it currently takes 45 minutes to travel the distance.

After receiving a safety certificate, the 1.5-km stretch between Hitec City station and Raidurg on Hyderabad Metro’s Blue Line was inaugurated on November 29, 2019. The opening of the stretch provided a major relief to a large number of employees working in information technology and allied sector working in the area.

In March 2019, a 10-km stretch of the Metro between Ameerpet and Hi-Tec City was inaugurated, covering 56 km out of the 72-km project.

All about Hyderabad Metro project

The project, which is being developed at a cost of Rs 18,800 crore, spans 72 kilometre and has three corridors. 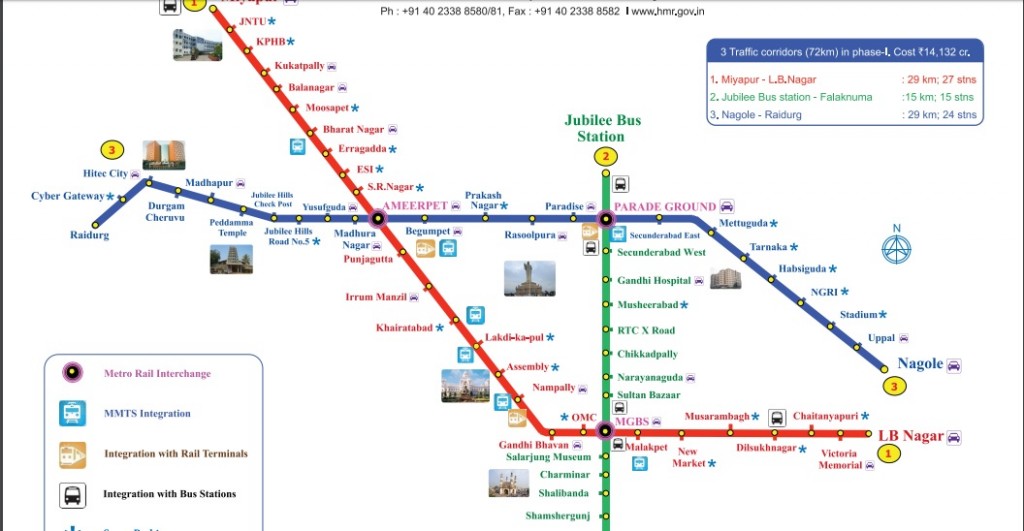 Corridor-I (Red Line): The Red Line of the Hyderabad Metro is a 29.2-km corridor, running between Miyapur and LB Nagar. It has 27 stations, including Miyapur, Kukatpally, Erragadda, Ameerpet and Punjagutta, among others. The route became partially operational first in November 2017, and then the second lap was open for public use in September 2018. It has now become the second longest Metro network in India after the Delhi Metro. The Ameerpet station and MG Bus station of this corridor are interchange junctions providing access to the Blue Line and the Green Line, respectively.

Corridor-III (Green Line): The 15-km stretch will run between JBS and Faluknuma with over 14 stations. These include JBS, Parade Grounds, Secunderabad, Gandhi Hospital, Musheerabad, RTC Cross Roads, Chikkadpally, Narayanguda, Sultan Bazar, M G Bus Station, Salarjung Museum, Charminar, Shalibanda, Shamsher Gunj, Jungametta and Falaknuma. This route is expected to become operational by the end of 2019. Planned in two phases — a 9.66-km stretch from JBS to MGBS and a 5.36-km stretch from MGBS to Falaknuma —  the route is under construction.

The two interchange stations on this route are Parade Ground and MG Bus Station.

Here are some interesting facts about Hyderabad Metro:

Unique stations: The Metro stations in Hyderabad will promote the cultural heritage of the city in their designs. Also, these stations will be well-equipped with energy efficient features, proper signages, convenient skywalks, parking area, facilities for the disabled and other commuter-friendly facilities.The stations will also be equipped with automatic ticket vending machines and automatic fare-collection system.

Inter-modal connectivity: The project is designed in such a manner that it connects to the other modes of transport, including existing rail terminals, MMTS and bus stations. This will help provide last-mile connectivity to commuters.

Fare: The base fare for a distance of upto two km will be Rs 10, while the highest fare will be Rs 60.