📲
All You Need To Know About Chennai’s Metro Network

All You Need To Know About Chennai’s Metro Network

It was in February 2019 when Chennai Metro Phase-I became fully operational, when Prime Minister Narendra Modi inaugurated the corridor that connected the northern end of the city with southern counterparts. Now, on February 1, 2021, Finance Minister Nirmala Sitharaman, in her Union Budget 2021 speech, announced the expansion of Chennai Metro Phase II corridor at an expense of Rs 63,000 crores. The new corridors under Phase II expansion will connect the northern periphery of Chennai with the southern suburbs which are currently being developed as next investment destinations, for Chennai real estate buyers.  Here's all you need to know about Chennai Metro:

This phase, which was initially proposed, is likely to be completed in 2019. On the other hand, an additional extension of the Blue Line towards Wimco Nagar, which was proposed and approved in December 2015, will be operational by 2022.

The Chennai Metro announced the second phase of the rapid transit system in December 2016. The project is a part of the seven lines that were planned by the Delhi Metro Rail Corporation (DMRC) for the city.

Here are some key facts about the proposed Phase-II of Chennai Metro Rail Project:

*Phase-II of the project will have three corridors and will run 189 kilometres covering 124 stations.

*Connectivity with the Phase-I route will be provided at St Thomas Mount, Alandur and CMBT stations.

*While the first phase was largely elevated, the second phase would largely be underground with only a few elevated sections.

*This time Metro will not just go underground but also under water. Twin tunnels will be constructed under Adyar River and Chetpet Lake at a depth of 20m. The one-km tunnels will link Adyar and Chetpet. The construction of these tunnels is likely to begin by 2019-end or early next year. The tunnels under Adyar River is expected to come up near Thiru Vi Ka Bridge while the second pair of tunnels under Chetpet Lake will link Chetpet Station with KMC Station on Barnaby Road. 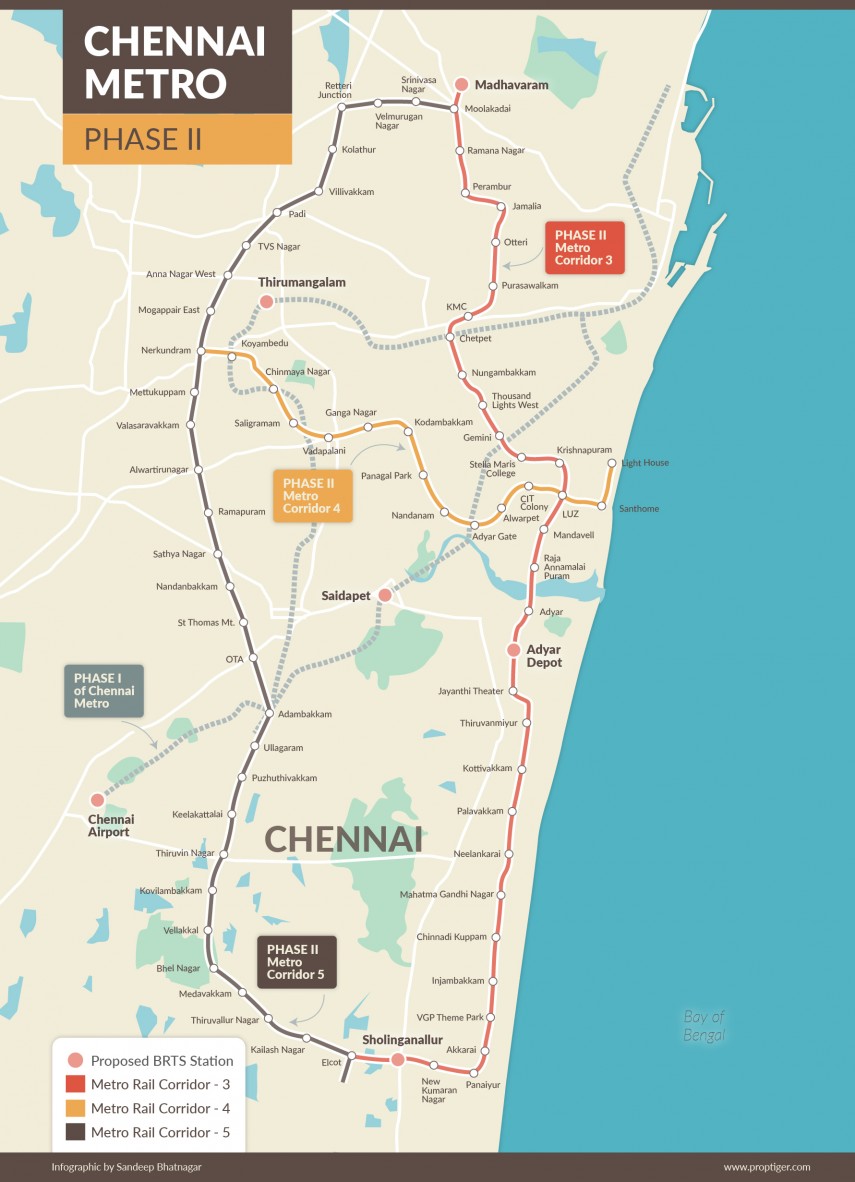 The fares in the Chennai Metro start at Rs 10 and go up to Rs 70. However, the first coach in every train is first class with tickets costing twice as much as the tickets for the rest of the coaches.

Data released by the Chennai Metro Rail Corporation (CMRL), till February 2019 the daily ridership in the Metro had crossed 80,000 mark.

The services of the Chennai Metro operate daily between 6 am and 10 pm with a train frequency varying between 10 and 20 minutes.

Book A Cab For Rs 15 To Board Chennai Metro

Fare Panel Will Decide If Delhi Metro Fares Should Be Hiked Annually: Puri