📲
Impact of toll plazas on real estate growth in NCR

Impact of toll plazas on real estate growth in NCR 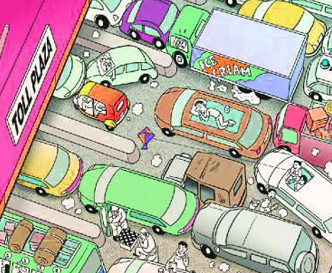 Infrastructure is one of the primary reasons for property price appreciation. Commuting infrastructure is even important as people sometimes prefer to stay at a secluded and serene place but they have to travel everyday for office, entertainment and basic amenities. The Delhi-Gurgaon expressway, which was initially considered to be the most attractive feature of the area, and its toll plazas have started garnering attention and publicity in a negative way.

An average professional in National Capital Region (NCR) does not mind staying on the city’s periphery and the far-off suburbs as it provides enough solace and relief from the daily hustle bustle. The only condition that has to be fulfilled is an effective and fast commuting option like the Delhi Metro. Likewise, the Delhi-Gurgaon expressway was seen as the connecting line for the easy and hassle free commutation within NCR; however, the present functional toll plazas are proving to be major hurdle on the way of modern living, rapid urbanisation and realty boom.

Most of the developers and builders are facing problems in selling the residential properties along the Dwarka Expressway; the homebuyers are aware of the chaos created at the Kherki Daula toll plaza during the peak hours and are apprehensive of further price appreciation due to the infrastructural flaw. Similarly, the long time residents feel that the toll plaza is a big impediment for commuting. Chandan Gupta lives at Sohna Road, Gurgaon real estate and works in a publishing house in Central Delhi; he says, “The travelling is so tiresome and stressful that I am planning to either change my office or relocate to Delhi. The biggest disappointment is that the entire traffic chaos is not due to the lack of resources, it is only mismanagement.” He further gives example, “The week when open access was allowed through the toll plaza, the traffic police was also really vigilant and the traffic was so smooth even at 9:00 a.m. on a Monday morning that it only took me 35 minutes to reach my office.”

Looking at the reluctance of people to invest in residential property in Gurgaon, Makaan.com has compiled the figures that portray that the properties available for sale in Gurgaon have been increasing over the years. It is true that the rise in properties for sale is due to a good supply; however, it is also a fact that there are very less takers for properties in Gurgaon due to traffic congestion and the existing owners are looking to sell out their properties:

Even after repeated discussions over the subject, the efficient management at the toll plazas, located on the 27.5 km-long Delhi-Gurgaon expressway, seems to be a failure. The phenomenon has ultimately started impacting the real estate development in the region. In the past few months, many buyers have turned off from almost finalized deals. When a buyer visits the region to invest in a residential property in Gurgaon, he/she is impressed with the entrance and the infrastructure of the expressway; however, when the same buyer comes back during the peak/rush hours, he gets terrified with the traffic situation and changes his/her mind regarding the buying decision. Traffic jams and congestion is a common sight at the toll plazas at Sirhaul near Ambience Mall and Kherki Daula near Haldiram.

There is a lot of commercial and residential space that can be used for further development, for example, a big patch is lying vacant near Manesar. The problem that persists is that when there are no takers for the current projects, the developers will not start up with the new ones; the entire situation comes down to blaming the adverse and further degenerating traffic condition at the toll plazas. If the two toll plazas are maintained smoothly or removed altogether, the Delhi-Gurgaon expressway can turn out to be a new growth engine for the real estate sector.