📲
Are any of the below factors holding you back from buying a house?

Are any of the below factors holding you back from buying a house?

One has to really ponder over before entering into the decision of buying a home; all the sources of income have to be calculated, there has to be a full proof plan of re-payment and there is no scope of risk. As the decision and purchase of a home is one that lasts with the person forever, one weighs every aspect of it beforehand.

After establishing the budget, the income and the expenses, it is a wise idea to establish a back up fund for the time of emergency. Ideally, one should have enough money to cover at least a few months of living expenses in the event that something happens to interrupt your income. The failure to establish this fund due to one reason or the other makes owning a property a complex task.

When asked by www.makaan.com in a survey, 25% of end users feel that in the present age of increasing privatization of major sectors, job uncertainty holds them back from buying a house; repaying is almost impossible if one loses his/her job. The same phase was experienced by many people when recession first hit and has left a fear in the mind of many. 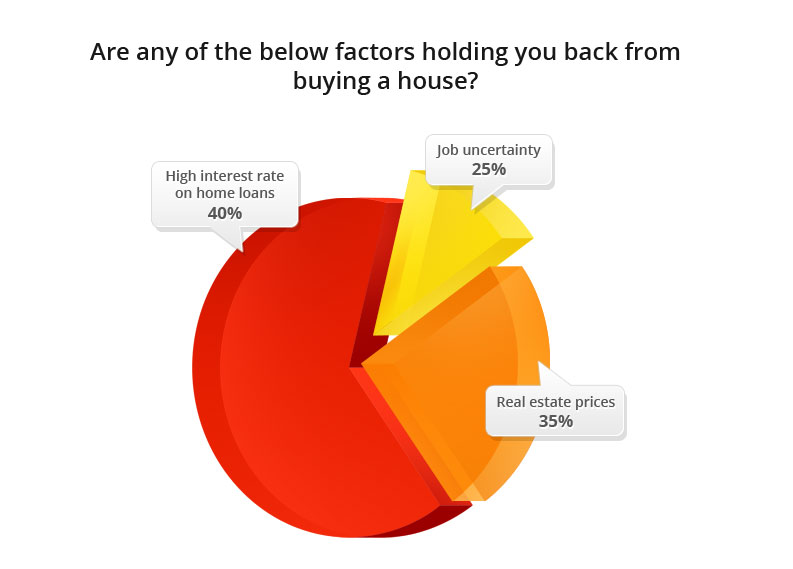 The interest on home loans is another major cause for people talking a back step from investing in property. Although there has been a recent rate cut, the possibility of another rate cut in near future is holding back the decision for majority. 40% of people feel that the prevailing interest on home loans is very high and that holds them from buying a house. It is expected by a majority of experts that in the coming days and the initiatives taken by RBI, home loans would become cheaper. The real estate prices have been ever increasing and on a national level in January 2013 there has been a 6.5% appreciation in the property prices as compared to last year. 35% of people believe that the real estate prices hold them from buying a house as the prices make the property out of their reach.

Buying a home is one of the most significant financial investments that one ever makes; therefore, it is only advisable to do a proper market research and survey prior to finalizing anything. For more of such poll reports and to cast your vote in a poll, visit: http://makaaniq.makaan.com/ .

Home Sutra: Where Should You Keep That Money Plant?

How To Claim Tax Exemptions On Multiple Home Loans?

Are You A Landlord? These Are Your Legal Rights